There is good in tradition!

Among our recognised expertise, making Traditionally Matured Emmental is one of the most undeniable. Entremont makes the wheels using the milk of French dairy cows which is traditionally matured using the experience of our master cheese-makers. This ancestral method, identifiable by its official label, requires the wheels to be matured on wooden boards in the open air. At least seven weeks of maturing in cellars is required for aromas and flavours to fully develop.  The wheels are cared for and turned by our master cheese-makers to guarantee the best possible quality on eating.

The story of Emmental

Emmental was created in the Middle Ages, in a region of Europe which is modern day Switzerland. The name of the ancient cheese comes from the short distance between a river and a valley: Emme et Tal. It is important to understand that, at this period in time, the only way to store milk was to turn it into cheese! Cheese fed the family during the long winter months and brought in a substantial amount of money in the Spring. Several farmers would combine their milk production to create the Emmental wheels which were huge even then. 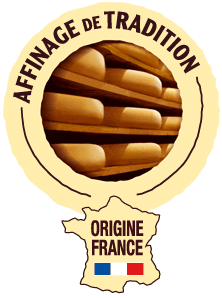